Cape Town, the capital city of South Africa, is fast approaching Day Zero. This will be the day when city authorities will turn off the piped water supply, which caters to Cape Town’s four million residents. Once this happens, residents must collect a legally guaranteed 25 liters per person per day from the approximate 200 water collection points across the city. 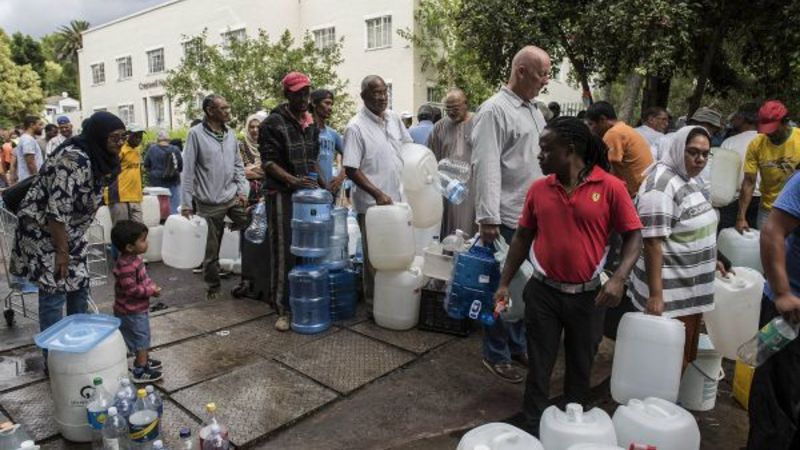 How did they get to this point?

When a once in a 600 years drought began impacting the water supply to the city’s six major reservoirs, residents were urged to drastically reduce their water consumption.

The largest reservoir – the Theewaterskoolf dam- is currently at 13% of its capacity. Cape Town receives on average 20 inches of rainfall annually (in a normal rainfall year), but the rainfall measurements over the previous three years (2017, 2016, 2015) have shown a catastrophically alarming decline – 12,8 and 6 inches respectively.

For the most part, the government hasn’t been proactive in listening to the volumes of data about the impending water crisis. As a matter of fact, the first warning that Cape Town would run out of water was published back in 1990.

The government was passive and relied solely on rainwater to meet the growing demand. While it is true that rainfall has fallen over consecutive years, the government is equally guilty of not driving home conservation measures, such as water supply regulations or alternate supply measures like desalination.

South Africa has one of the largest gaps between rich and poor in the world. This inequity has reared its ugly head in the ongoing water crisis. Before the water crisis, the wealthy allegedly consumed obscene amounts of water and thwarted the commissioning of desalination plants along the coast as noisy eyesores.

Water access is governed by the ability to pay, so this inequality will not cease to exist. Yet urban planners in many developed nations design for universal water access, regardless of the populace’s economic status, after determining inequitable access to water and sanitation may lead to disease outbreaks.

The recent spate of action by the government has brought some respite. Day zero was pushed from April to June. This has been partly due to strong regulations on the per capita consumption of water. No more than 50 liters per capita per day – violators are levied punitive fines. For instance, households consuming 20 kiloliters per month will see a 200% increase in their water bill. Also, a farmers’ association agreed to divert water from their private reservoirs to one of the public water supply reservoirs feeding the city.

Besides the reduction in water availability for the city, the water crisis has had unintended consequences. Cape Town relies heavily on tourism income and has been hit heavily economically due to dwindling tourists. This may have led to an increase in unemployment. With reduced water for farming, there will be a significant impact on food production and this in turn will spike food prices again adversely affecting the poor.

As a silver lining, citizens do not take water for granted any more. They have started exploring other ways and means to reduce water consumption. Notably, households have started using grey water for flushing toilets and watering their gardens. It would be interesting to observe if they go back to their old profligate ways once the gravity of the situation eases up. On another positive note, the government has been forced to swing into action. There is hope that it takes proactive measures for preventing a repeat of the current situation in the future.

Lessons to be learned

While Cape Town is currently facing the wrath of climate change and inefficient water management, many other cities in the world are equally at risk. Sao Paulo in Brazil was down to less than 20 days of water supply in 2015. Mexico City, Bangalore and Delhi in India are other cities facing a precarious water availability situation.

In the US, Los Angeles comes in at number 9 in the Nature Conservancy water stressed cities list. Irregular rainfall and higher evaporation rates from rising temperatures caused by global warming will unfortunately result in more such crises on a global scale.

Article Summary For this article, we will be discussing underground septic tanks, and size refers to the septic tank’s total volume handling … END_OF_DOCUMENT_TOKEN_TO_BE_REPLACED

Executive Summary The import, export, manufacturing and production industries are experiencing a variety of problems in Q1 2021 within the areas … END_OF_DOCUMENT_TOKEN_TO_BE_REPLACED

There are many reasons people around the globe choose to participate in rainwater harvesting. It could be to feel a sense of satisfaction and pride … END_OF_DOCUMENT_TOKEN_TO_BE_REPLACED