It’s widely understood that the water collected from rooftop runoff can serve a variety of potable and non-potable purposes. Yet it’s important to remember roofs aren’t clean, and harvested water may accumulate Because of this, it’s recommended that rain water be filtered before it moves into the storage tank. Filtration systems range from a simple sediment filter designed to remove physical impurities up to advanced systems that perform multiple functions.

Prior to rain water entering the filter, a first rain separator can be used to isolate most impurities. This elegant, cost effective mechanism is also referred to as a first flush diverter. It works by collecting the initial runoff generated during a rain shower (which washes off most of the dirt from the rooftop). By isolating this initial runoff, the amount of actual impurities getting into the filter is decreased, thereby increasing the life of the filter.

Ways to use the separator

In one common design the downpipe from the roof is cut at a certain height from the ground and is connected to another pipe with a Y/ T joint. The original downpipe has a valve at the bottom. The initial runoff laden with silt is deposited in the original pipe. Once the water level reaches the Y/ T joint, it will take the easiest path and enter the Y/ T joint and subsequently the new downpipe. The new down pipe leads to the filter and then the storage tank. After the initial rain shower, the gate valve/ end cap in the original pipe must be opened to discharge the silt laden water. 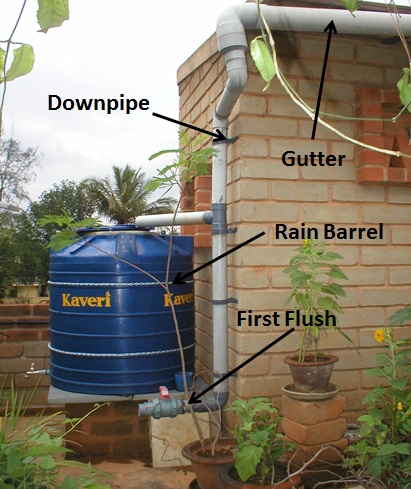 In cases where the customer is keen to not waste the first rain water by draining it off, it is collected in a HDPE tank. The downpipes from the rooftop are first connected to a rain barrel. An overflow pipe is affixed to the top of the rain barrel, which is connected to the filter. During a rain shower, the barrel is filled. Once the water hits the overflow pipe level, it finds its way to the filter. The dirt becomes trapped in the rain barrel. This water can be used for non-potable uses (like gardening) which do not require high quality water.

Regardless of the which method is employed, implementing a first rain separator is an ideal option to reduce the number of contaminants and impurities within rooftop runoff as it continues onward to the filter and finally to the storage tank.

Article Summary For this article, we will be discussing underground septic tanks, and size refers to the septic tank’s total volume handling … END_OF_DOCUMENT_TOKEN_TO_BE_REPLACED

Executive Summary The import, export, manufacturing and production industries are experiencing a variety of problems in Q1 2021 within the areas … END_OF_DOCUMENT_TOKEN_TO_BE_REPLACED

There are many reasons people around the globe choose to participate in rainwater harvesting. It could be to feel a sense of satisfaction and pride … END_OF_DOCUMENT_TOKEN_TO_BE_REPLACED