The world’s nations and populations are not equal – in terms of available resources, economic activity, human development, social and cultural rights, skin color of the populace… the list is endless. Water as a resource is also not available in equal measure. For instance, someone in Africa may be getting by with 47 liters of water per day while his or her counterpart in the United States is blessed with 578 liters per day. Consequently, there are varying levels of acceptance of water as a precious resource and not as a commodity.

Let’s look at how four countries/ regions are enacting their water sustainability efforts.

The annual rainfall in Germany varies between 500 mm to 1000 mm in most places, with Southern and Central Germany receiving heavier rainfall relative to Northern Germany. Germany’s population is 81 million (2015 data).

Though rainwater harvesting is gathering momentum, industrial air pollution and stringent regulations have restricted the use of harvested rain water to non-potable uses (like toilet flushing and landscaping requirements). Harvested rain water is also used in industrial cooling processes.

Rainwater harvester installation activity has been relatively high in Germany when compared to its European neighbors. Many new developments are being built with rain water storage tanks for meeting the landscape water requirements. One innovative measure has been to trap rainwater flowing over streets using underground tanks (below streets, parking lots and other paved surfaces which generate significant runoff).

In addition to cutting down on municipal water consumption, there is an economic incentive. Most German cities charge residents a storm water drainage fee. This fee is waived if the rainwater is retained or recharged into the ground. The government also provides subsidies and grants to encourage the adoption of rainwater harvesting systems. Some of the landmark rainwater harvesting installations were in Potsdamer Platz in Berlin, Cultural Center UFA Fabrik in Berlin Templehof.

Singapore is a tiny island city-state in southeast Asia. It is blessed with an abundant 2400 mm of annual rainfall. Yet with increasing water demand, there is a significant shift towards alternate sources of water since Singapore does not have its own water source (surface or ground water).

Until around 2004, collecting and using rainwater for personal use was forbidden by law. The rationale was that rainwater was a common resource, so its collection, storage and reuse had to be governed by the Public Utilities Board (PUB) of the state. Since then, with increased advocacy for individual rainwater collection and usage, the PUB has relaxed the restrictions and legalized individual collection and reuse.

Currently, the collected water is subjected to basic sedimentation and chlorination treatment, then reused for toilet flushing and landscaping requirements. In addition to rainwater harvesting, Singapore relies heavily on treated waste water. Officially called Newater, the waste water generated is treated through a series of stages (membrane based filtering, reverse osmosis and ultraviolet disinfection). Then it is fit enough to be used for drinking and cooking. In fact, Newater exceeds the drinking water standards of the United States’ Environmental Protection Agency. Newater is already meeting around 40% of the total water demand and is projected to meet 55% of the total water demand in 2060.

Most people in Africa do not have access to clean drinking water. The irony is that countries like Kenya and Ethiopia receive enough rainfall to meet their water demand many times over. A United Nations environment program indicates that there is no physical scarcity of water in Africa but a condition exacerbated by lack of investment in water conservation measures.

In any water supply initiative, the focus is generally on large scale, centralized projects like dams. Yet, a dam, with its large surface area, loses significant water to evaporation. Also, large scale projects (more often than not) do not meet the needs of the poor.

Rainwater harvesting can be adopted as a supplementary solution with much larger coverage. Storage of harvested water in tanks mitigates losses due to evaporation, while simultaneously acting as a dependable local water source for areas not connected to the municipal water supply (which is the case with most African countries). 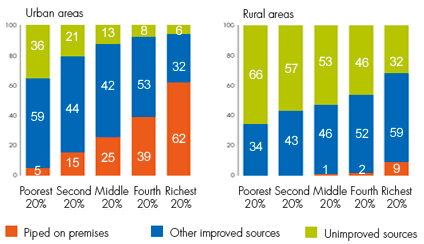 The success of adopting local solutions like rooftop rainwater harvesting and reviving wells is documented by The Water Project, which mobilizes funds and executes such projects in different parts of Africa. One such documented case can be found here:

WaterProject – A Rainwater Harvesting case study of a school in Kenya

Rainwater harvesting was a cherished tradition in India, but lost ground with the advent of British rule. Traditional water systems gave way to piped and centralized water supply systems. The connection that existed between the water user and the water body (source) was lost. Increasing population and urbanization further doomed water self-sufficiency, and people started becoming dependent on the utility. On the other hand, increased subsidy- driven agriculture meant that water was “free” for farmers (farmers didn’t have to pay a tariff for the power consumed from drawing water from bore wells).

Recharge of ground water was abysmal as increased paved surfaces led to increased runoffs flowing through drains, eventually ending up in the sea or evaporating.

All of these factors have led to a severe water crisis that is underway in many parts of India. This in turn has triggered a serendipitous encounter with the age-old rainwater harvesting practice. A couple of states have enacted laws to make rainwater harvesting mandatory for residential, commercial, and industrial establishments. It remains to be seen if the remaining states follow suit in making rainwater harvesting an essential component in driving water self-sufficiency.

The sampling of countries considered here is too low to make a specific conclusion. Yet, it is interesting to note the diversity in conservation efforts revolving around water. Where water is in abundance, an effort is directed towards preventing pollution at the source, supplementing alternate sources of water (including rainwater) for non-potable uses, integrating water as a design element etc. In contrast, conservation efforts in water-scarce countries focus solely on securing water for lifeline uses (potable consumption), and rainwater is an integral element in these efforts.

Article Summary For this article, we will be discussing underground septic tanks, and size refers to the septic tank’s total volume handling … END_OF_DOCUMENT_TOKEN_TO_BE_REPLACED

Executive Summary The import, export, manufacturing and production industries are experiencing a variety of problems in Q1 2021 within the areas … END_OF_DOCUMENT_TOKEN_TO_BE_REPLACED

There are many reasons people around the globe choose to participate in rainwater harvesting. It could be to feel a sense of satisfaction and pride … END_OF_DOCUMENT_TOKEN_TO_BE_REPLACED