Siphon drainage systems were first developed in Europe in the late 1960s. They differ from conventional gravity based systems in that they don’t allow air to get into the drainage outlets installed in the roof tops. A conventional gravity based system permits water and air to enter roof drainage outlets, where they move into the vertical downpipes. Consequently, not all of the pipe bore is used for water flow. This reduces operational efficiency and water flow velocity.

In a siphon drainage system, baffle plates installed in the mouth of the roof outlets prevent air from entering the pipe. When the entire pipe is filled with water, the column of water in the vertical downpipe falls, forming a zone of negative pressure in the horizontal pipe, which creates a state of suction. This in turn pulls down more water rapidly and increases the flow velocity. The baffle also functions to prevent the formation of vortices (which can suck in air) in the drainage outlets.

In a siphon based system, the horizontal section of pipe connecting multiple roof outlets does not require a gradient for the flow of water since water flow is dictated by the suction in the pipe. The horizontal section can be run very close to the roof, reducing both the amount of space used for pipe work and impact on building aesthetics. The vertical downpipe can be installed in the desired location (near the end of the building), which reduces the use of expensive underground drains to transport discharged water.

Another feature of the siphon based system is the decreased pipe diameter when compared to an equivalent gravity drainage system. Pipe diameter is decreased to ensure full bore flow which is necessary to create the suction state. 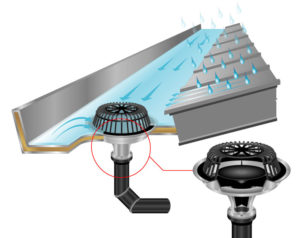 The design of the siphon roof drainage system is largely determined by the rainfall intensity rate of the area. Historic data must be considered, as well as a safety factor, to accommodate abnormal heavy rainfall events which can result in roof flooding if water doesn’t drain fast enough.

Incorporating too high a safety factor can result in an over-sized system that won’t operate as a siphon system for almost all rainfall events. If the volume of the air entering the pipe is more than 40% of the pipe volume, then the system ceases to function as a siphon system. This defeats the purpose of opting for a siphon based drainage in the first place.

While siphon systems have found widespread acceptance in Europe, Australia, and New Zealand to name a few, it has yet to gain momentum in the United States.

Article Summary For this article, we will be discussing underground septic tanks, and size refers to the septic tank’s total volume handling … END_OF_DOCUMENT_TOKEN_TO_BE_REPLACED

Executive Summary The import, export, manufacturing and production industries are experiencing a variety of problems in Q1 2021 within the areas … END_OF_DOCUMENT_TOKEN_TO_BE_REPLACED

There are many reasons people around the globe choose to participate in rainwater harvesting. It could be to feel a sense of satisfaction and pride … END_OF_DOCUMENT_TOKEN_TO_BE_REPLACED