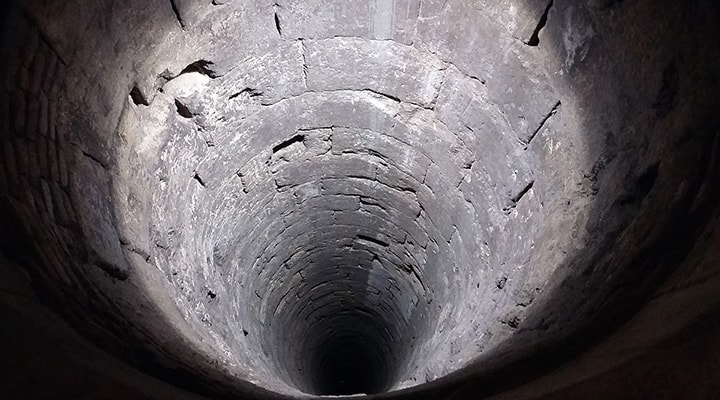 So you’ve bought your piece of heaven and are going to build your dream home (or business) on it, but there’s a catch- it’s off the grid. No water main, no power lines, no nothing. You start ticking off the utilities: solar panels- check, septic system- check, cisterns and water storage tanks- check, water well… that last one sounds simple until you have to decide how it to go about creating one. So just what types of wells are there and how are they constructed?

Wells provide life sustaining water for many areas that aren’t connected to the municipal water supply. They’re also extensively used as the primary source for irrigation, so in a way they’re responsible for the food on our plate. As important as they may be, there aren’t many methods for their creation. They’re either dug or drilled to access ground water from aquifers.

Can you dig it? And do you want to?

Dug wells date back to the Neolithic era. They were predominantly used as a source of water in Asia, Australia, and Africa. Dug wells with descending steps into the heart of the well were pretty common in western parts of India. They served as both a source of water and a place for resting. People converged inside the step wells to escape the daytime heat.

Not much has changed over the years in the way these wells are made. Dug wells are still mostly done by manual labor, but are less expensive than drilled wells, which use advanced machinery to drill through hundreds of feet of soil and rocks. In many rural areas, dug wells are still an important source of potable water drawn from shallow aquifers. 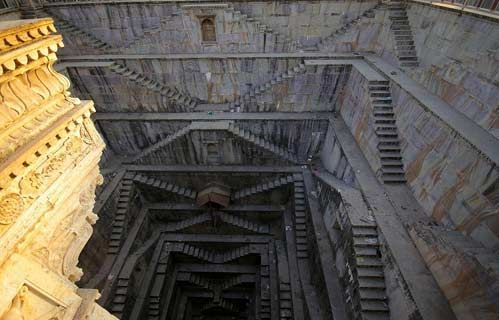 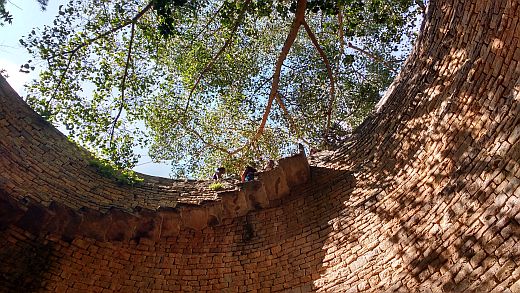 Illustration 2: From inside a step well in Bangalore, India

Dug wells should be large enough in diameter to allow for two or more people with shovels to get into the well for digging. To prevent the soil from caving in, dug wells are lined with bricks or stones.

Dug wells are fairly low on operating costs since water is mostly hand drawn using containers hoisted over pulleys. Another beautiful tool to bring the water up is a Persian wheel. Since the depth of dug wells tends to be shallow, even if a pump is used to extract water, the energy costs are lower compared to a drilled well. 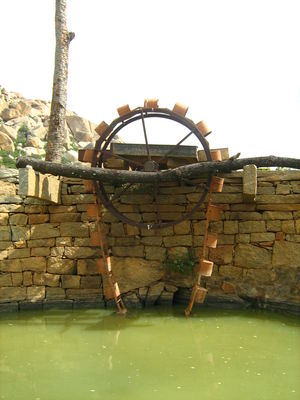 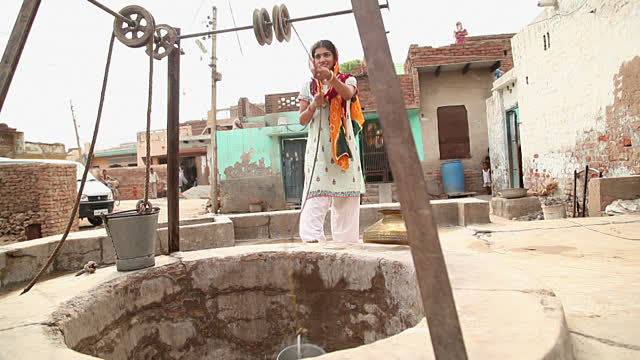 A drawback to dug wells is that in areas where underground sewer networks are absent, dug wells are prone to contamination with sewage. Dug wells are not feasible where the underlying substrate is rocky. It is also relatively more time consuming to dig a well than to drill a well. Diggers should proceed with caution as there is always the risk that the side walls will collapse during their work within the well.

Drilled wells are used to extract water from deeper confined aquifers. They are created by drilling machines known as rigs. The rig drills a hole or a narrow vertical shaft of a certain diameter through the weathered and rock substrate. Water may be struck at multiple depths during this process, so drilling is stopped when the desired level of water yield is achieved.

A galvanized iron or HDPE pipe is lowered into the borehole until it hits the depth where water is available. The water from the borewell is drawn through a pump, which can be either a submersible or a mono bloc pump.

Some of the key attributes of a borewell are: 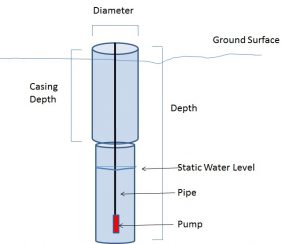 Illustration 4: Cross Section of a borewell

Deep aquifers take a longer time to recharge when compared to shallow aquifers, so borewells are not really a sustainable source of water extraction. In comparison to a dug well, it is much more expensive to drill a borewell, and the operating costs are higher since the water is pumped from much deeper depths.

Digging and drilling a well each have their pros and cons. How much money can you afford to invest in a well? Do you know where and when you’re going to hit water? Is there a possibility of water contamination if you keep the well shallow? There are many factors to consider, perhaps more than you previously thought? Regardless of which method you choose, you’re now armed with the knowledge to confidently pick up a shovel, or know when to call for a really big drill.

Article Summary For this article, we will be discussing underground septic tanks, and size refers to the septic tank’s total volume handling … END_OF_DOCUMENT_TOKEN_TO_BE_REPLACED

Executive Summary The import, export, manufacturing and production industries are experiencing a variety of problems in Q1 2021 within the areas … END_OF_DOCUMENT_TOKEN_TO_BE_REPLACED

There are many reasons people around the globe choose to participate in rainwater harvesting. It could be to feel a sense of satisfaction and pride … END_OF_DOCUMENT_TOKEN_TO_BE_REPLACED